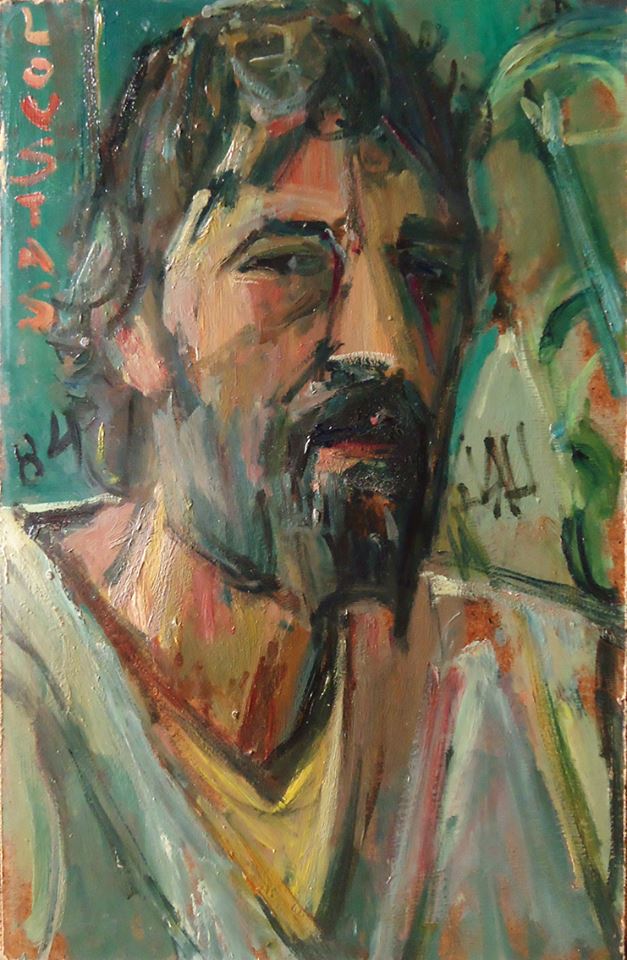 This is the official website of Greek fine artist Kostas Loustas, managed by the artist’s son and daughter, Stergios and Tarsi-Mimi Loustas, heirs and curators of his artistic estate.

Kostas Loustas was born in Athens and brought up in Florina (northwest of Greece), a town with a rich artistic and cultural heritage. He studied at the Athens School of Fine Arts (1953-1958) with Yiannis Moralis being amongst his teachers and mentors. He first received international acclaim in New York City during the early 1960s where he lived and worked for several years.

His solo and group exhibitions of this period include, among others, those at Saldinger (40W 57thstreet), Chase (31E 64th street), Chevance (714 Madison Avenue) and Joseph Paolillo (845 Madison Avenue) galleries in New York City, and Zaydler Gallery (39C Harrington Road, South Kensington) in London. His collaboration with Galerie Internationale (1095 Madison Avenue) in New York, where he first held a solo exhibition in 1972, continued for several years following his permanent return to Thessaloniki, Greece in the early 1980s.

The Engonopoulos and Syllogi Galleries in Athens hosted solo exhibitions of his work in 1980 and 1983 respectively. In 1991, the Municipality of Thessaloniki honoured his thirty-year artistic presence in the city with a major retrospective show at the Vafopoulio Cultural Centre. In 1993, with his series of ‘80+1 Portraits of Thessaloniki Personalities’, exhibited by the Municipal Gallery in Thessaloniki, he was honoured by the mayor and the state for his contribution to the Greek Arts and Letters.

In 1999, the London art gallery of Paul Hawkins in Mayfair hosted a solo exhibition of his work. Further solo exhibitions organized by the Municipal Art Gallery of Thessaloniki include the series of still-lives entitled ‘Elgar 96’, inspired by his love for classical music and the violin in particular, a series of nude paintings entitled ‘Variations 2000’, and ‘Amelia 2004’, the last of which is a tribute to his three-year old grand-daughter Amelia.

He collaborated with the art galleries of Mihalarias, Kapopoulos Fine Arts, Aenaon, Ersis and Periplanisi in Athens. Two solo exhibitions were held at Atrion Gallery in Thessaloniki in 2010 and 2012.  A significant part of the artist’s private collection of paintings was exhibited at the Vafopoulio Cultural Center in November 2012. The Corfu Art Gallery and the Benaki Museum (N. Hadjikyriakos-Ghika Gallery) in Athens held retrospective exhibitions of his works in 2016.

In 2018, the solo exhibition Kostas Loustas New York at the MOMus Museum of Contemporary Art in Thessaloniki was devoted to the artist’s life and work in New York City during the 1960s and 1970s. In 2019, the Teloglion Arts Foundation  exhibited unknown paintings and drawings from the Foundation’s permanent collection as well as from the artist’s family collection. On the 5th anniversary of his death, Nitra Gallery in Thessaloniki with the exhibition entitled ‘Cielo e mar’ showcased exclusively seascapes spanning a period of more than four decades.

He published poetry and many articles in national newspapers as both author and critic. In 1977 he received an award from the Society of Greek Writers in Athens. He was a member of the Chamber of Fine Arts of Greece, and up to 2008, he had been on the board of directors of the Greek State Museum of Contemporary Art. His autobiographical book entitled More than one hundred rings for princes was published by Ianos Publishers in 2006.

… Loustas presents fine lines blending with a geometric or Cubist influence, optical illusion, lucidity of style, suitable realism and post-Impressionism … works which glow with color and spirit… He is not an imitator … of any style. Mr Loustas is his own stylist by giving every instance its own need.

Loustas uses bold strokes but soft colors in his New York paintings … His passionate attachment to the city is apparent in every canvas he has done … He has successfully captured the heart of the city in “Childrens’ Zoo”, “The Postman”, “At Broadway” and “Children Around a Tree.

A poet of the brush …

In the paintings you presented there are no ostentatious, contrived and meretricious concoctions which fool the ignorant. This is honourable on your part. With the talent you possess you could go very far as long as you wish it and without fearing hard work. With a lot of love and appreciation, your former professor, Yiannis Moralis.

Handwritten letter by Yiannis Moralis to Kostas Loustas, dated May 3rd 1968, on the occasion of Kostas Loustas’s solo exhibition at the Hilton Gallery in Athens.

Not only do we see Florina in the varying seasons but through the veil of the many moods of the artist, for the balance of joy and sorrow in the spirit of Loustas is sensitive and quicksilver. One moment Florina is all colour, movement and happy action and the next empty, drained of colour, a town of melancholy and rain. His quest is for the truly artistic rather than the sensational. The casting of shadows, the catching of reflections, the spreading radiancy of an Autumn day, these more intangible things he has the ability to depict  … His line is quick, deft and assured.

A highly rewarding one-man show … on display at the Galerie Internationale … 42 oils … executed in broad, self-confident strokes of subtle, integrating color.  Many, such as … a superb series “Olympias Halkidiki” are extremely exciting compositions both when viewed as abstract works and as representational, moody paintings.

Kostas Loustas startles us with … a series of paintings which astound us not only by their number (more than eighty portraits of personages and personalities of post-war Thessaloniki) but also for the scope and the nature of his figurative expression. These are works which … attempt to go further and to portray all the dimensions of each subject – professional, social, intellectual, spiritual.’… Loustas gives us an astounding collection, a whole gallery of works which … display the characteristics of a personal expressive idiom.’ … The artist seeks and succeeds to accent the typical without sacrificing the personal, to express what is inside without adhering faithfully to the superficial. The value and the importance of this whole series of portraits … does not lie so much in the subjects portrayed … as in the artist’s endeavour to transmit something of their particular substance, as he understood it, through expressionist values. In other words, he attempts a psychological penetration which translates into optical values and expressive formulations which never leave the spectator indifferent.

With his incisive perception and freshness of sensitivity he offers … works employing his beautifully crafted expressive language, a language without superfluous ornament …Without repressing his own emotion, Loustas records moments from the everyday life of the little girl … endeavouring to convey the full spontaneity of her childlike innocence and the whole range of feelings still free from the rigid patterns of adult intention. In his distinctive, elliptic style, abstracting and abstracted he captures the vital essence of the subject endowing it with his own special values, using his skill to highlight the child’s psychological disposition as she finds her way through the fragile world of the adults around her.

What makes Loustas’ work so spectacular is the way in which he makes full use of his extraordinary skill in handling colours and shapes to portray human emotion.

A painter of supreme talents with a continuously rich artistic production for the past 50 years…instantaneous visual perception of the subject, quickly transferred onto the canvas with expressionistic brushstrokes and colours which are almost violent but also innocent…Loustas is immersed in the landscape, and becomes one with the moisture of Northern Greece which sits heavily on the colours…Already established amongst experts, he can deservedly claim a great deal more in our country’s history of landscape art.

In addition to his academic education, his paintings reveal a deep knowledge of the currents of European art, and what the previous generation of Greek painters learned from them. Loustas experimented with techniques and materials, eventually cultivating a personal idiom of soft expressionism, which culminated in his series of “80+1 Portraits of Thessaloniki Personalities”.

He knows how to transform the day-to-day into something atmospheric, full of poetry and sentiment, forming at the same time a direct bridge of communication with the emotional world of the spectator. His paintings are in absolute harmony with the seemingly simple but literary observation of everyday life, and he lures the spectator-reader into an internal description of his chosen subject matter.

Subscribe to be notified of upcoming exhibitions and events
